Fitting everything you need for four people into a van can be a challenge. You have to really think about what the necessities are, and then start to subtract… We have no oven and no freezer, no toilet nor shower inside the van, but of course, all four of us need somewhere to sleep. Danne and I accommodate on the sofas that can be made into a bed, that I wrote about in my first conversion post.

But unless we wanted to take turns sleeping, we needed two more cots. We decided to go with a bunk bed system for the kids and in our constant pursuit of saving space, we wanted the bunks to be removable so that we could put them away when they weren’t in use. Also, our van has lots of windows (there are windows behind the buffalo check fabric on the pictures below) and not much wall area, which made it a little tricky to mount the beds. So this is how we did:

Danne, who is a blacksmith/welder, manufactured brackets of stainless steel and attached them with screws, large washers, and nuts to the beams above the windows on both sidewalls. Between the brackets, we put four stainless steel poles with a diameter of 38 mm. Three of them have small hooks welded onto both ends so they don’t accidentally slip out. The fourth one, closest to the back, doesn’t need any hooks since its brackets have a different design.

Danne didn’t want me to post the two pictures above. He says the welds are really ugly and made in a hurry… Well, at least they fulfill their purpose! 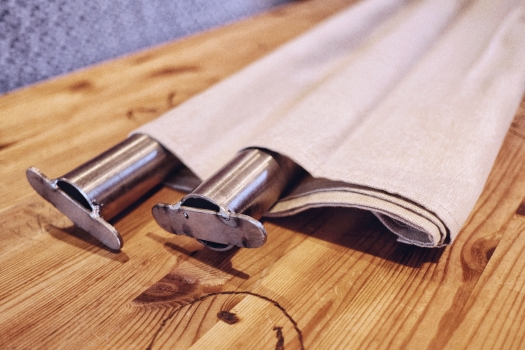 I sew two “bedsteads” of heavy fabric, with channels that the poles run through. I used the type of fabric that awnings are made of, I made double seams and I also used an extra strong sewing thread. On top, we put foam mattresses or sometimes just sleeping pads. 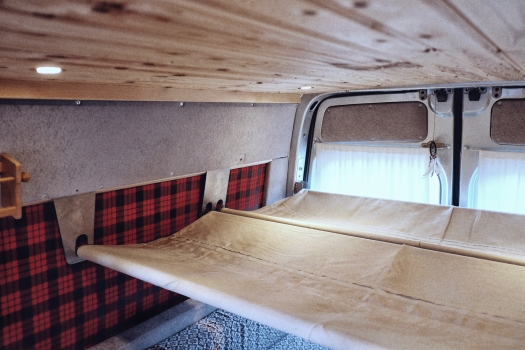 Even though both beds are removable, we usually leave the one closest to the backdoors in place and use it as a shelf to store our bed linens on. The other one we just roll up and strap to the ceiling.

The kids are pleased with their bunks, and actually, it works for medium-size adults too. 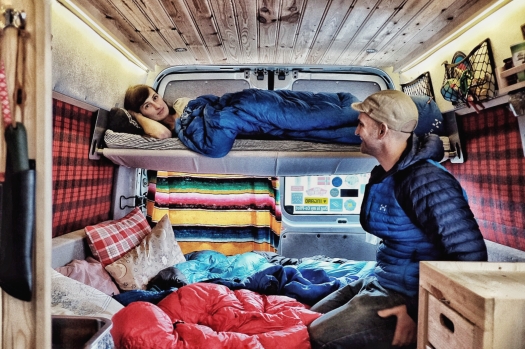 The Beast from the East is raging in Sweden right now, giving us blizzards, sub-freezing temperatures and snowy roads with poor accessibility. But summer is actually not far away and we have started planning for it.

Last summer we did our first longer van trip. We were on the road for a month, traveled endless kilometers, visited Öland, Kinnekulle, Åre, Stalon, Lofoten, and Åre once again. We experienced so much wonderful nature and enjoyed so many magnificent sceneries: the wide, beautiful alvars of Öland, the dramatically orange colored Kinnekulle quarry with its turquoise lake and of course all the breathtaking mountains and waterfalls in the north of Sweden and our neighboring country Norway.

The kids weren’t as impressed as us though. Sure they appreciate road trips, hikes and camping sessions, but to them, it’s not about the beauty of nature. They just care about adventurous activities, having fun and doing things together as a family. 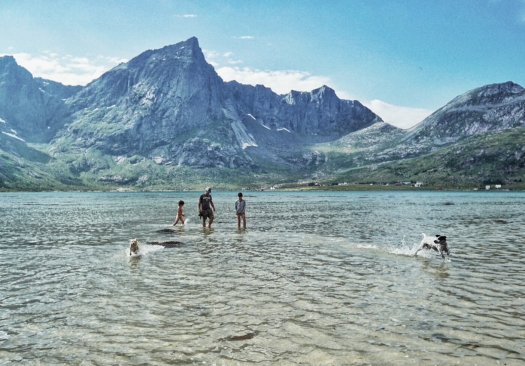 Also, when we think back on it, it kinda felt like we were always on our way, constantly heading somewhere else. The fact that we were free and able to go where ever we wanted actually got us a little stressed. In retrospect, I think we tried to squeeze a little too much (nature) into our four weeks long holiday. And although the trip was a blast, there are things we are going to do differently next time. 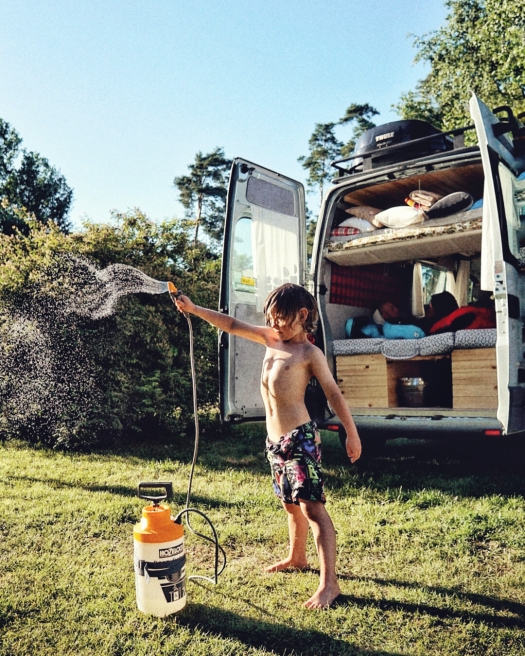 This summer we are headed south. Our plan is to explore Denmark.
But we’re not gonna have a long list of beautiful places to visit, instead, we are going to focus more on the kids’ desires. We will stay longer in one place, and hang out as long as the kids want. We’re going to hit beaches, bike parks, cafés and even Legoland. Chasing after scenic views will have to wait. It might mean a little less Oh Wow moments (for the adults at least) and maybe not as many Instagram friendly photo locations. I’m not saying Denmark isn’t beautiful because I know it truly is, but when you have a soft spot for mountains and deserted landscapes, it might not be exactly it. But I’m feeling positive that we’re going to have a great time though! And I’m crossing my fingers for more sun and less mosquitos this year… 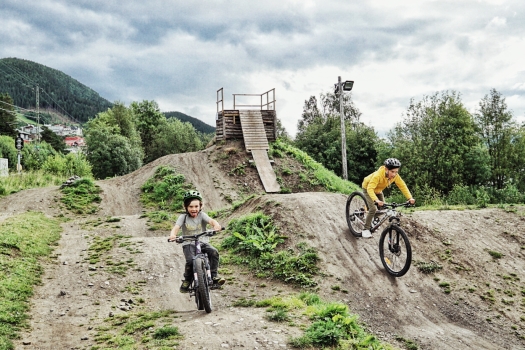 MoMo, our van, is an Opel Movano from 2009. The Movano (badged as Vauxhall Movano in the UK) is similar to the Renault Master and the Nissan Interstar. Our’s has a manual gearbox and runs on diesel. We have the version with windows all around and with 9 seats originally, so I guess it’s more of a mini-bus really.

When we started the conversion, we didn’t use a design drawing and the plans were made up as we went along. Unfortunately the documentation of our build became quite inadequate, but here are som pictures from the early days. 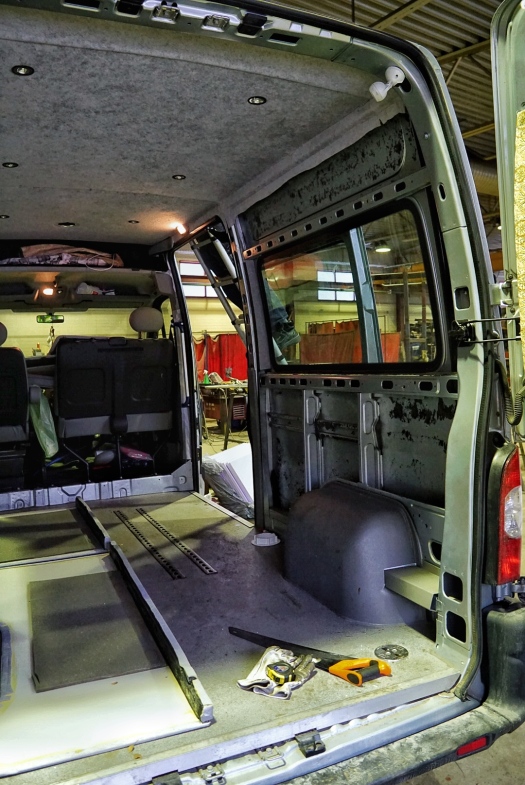 First we removed 4 of the seats and the panels on the walls and in the ceiling. Then we insulated the van using XPS200 foam and sleeping pads. We also added plastic pipes in the walls for future electrical wiring.

A lot of people put a waterproof layer between the insulation and the inner wall panels to stop condensation from affecting the car body, but we didn’t bother with that. We reasoned that the van will be passé for other reasons before rust from the inside will be a problem. It remains to be seen if we are right or wrong…

The inside of the beams, where we couldn’t fit any foam, were filled with glass wool stripes meant for insulating windows. Glass wool normally absorbs moisture, but we used the kind of stripes that are wrapped in plastic film. 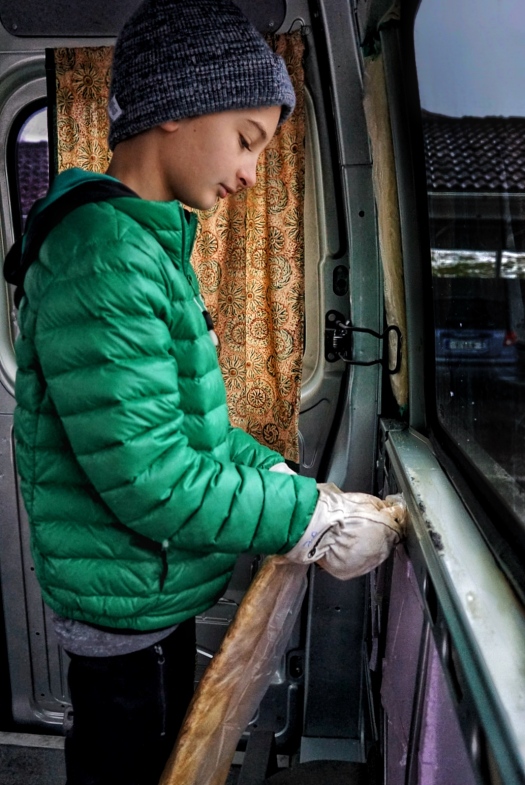 Since Danne is a blacksmith, a lot of the interior in our van is made of steel, that we have covered with wood to make it more cozy. We are suckers for cabins and cottages and the look that we’re after is inspired by Scandinavian folk, pinewood and nature.

When the insulating was finished we put pinewood panels in the ceiling. For the walls we reused the original panels. They are far from beautiful, but quite discrete and we think they look ok. We wanted to use wood but we had to keep the weight down, and also, wood panels would probably take up a little more space.

The interior setup we decided for was sofas with a table that can be turned into a bed. In the beginning we went for a U-shaped sofa which made for a huge bed, approx. 2 x 1,75 m, but when we tried it out we found that we could actually lay comfortable from side to side. As we felt we needed all the living space we could get, we then removed the “bottom of the U” sofa section.

Of course the kids needed somewhere to sleep too, and we opted for removable bunkbeds. In the picture below you get a glimpse of the stainless steel brackets attached to the beams above the windows, that are part of our bunk bed solution. In the next Conversion blog post I will tell you more about it.

Last fall we started a collaboration with Dometic that gives us the opportunity to try the HBG 2335 cook top. Dometic’s slogan says Mobile Living Made Easy, and we can certify that their statement is right on point. 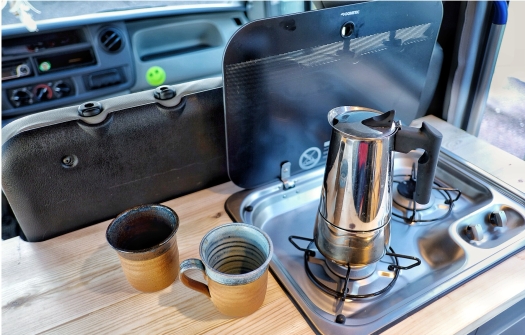 With the installation of the kitchen area with the built in the cook top, we went from our morning coffee taking 15 minutes to make, to ready in 5!

One of my favorite things about the cook top is the space efficient design with a lid, that gives us extra workspace when the hob is not in use. For us, it’s a must that every little inch in the van can be used to the max. Also, the kids thinks the glass lid looks sooo classy!

The guys at Dometic interviewed us about… well, vanlife of course 😉 You can read it here.

Since we are four persons and two dogs in the van, it gets crowded. We need to be creative with the use of space, so of course we’re taking advantage of the outside of the van too.

Danne is a blacksmith/welder and he has made a giant roof rack that covers MoMo’s entire roof.

Attached to the rack is a 160 w solar panel that actually provides us with all the power we need, during spring, summer and early fall. How amazing is that!?

We have an awning for protection against rain and sun (like to much sun would be a common problem in Sweden!? Not really…). Awnings are expensive and also quite sensitive to wind, so ours is extra-equipped with a rafter and a tie down kit. 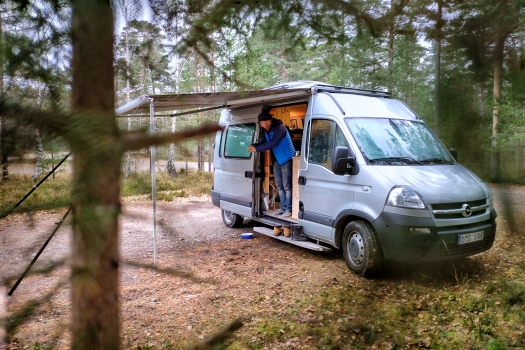 Things we don’t use on a daily basis, like tents, hiking boots, skis and fishing equipment we store in a big Thule roof box. It swallows heaps of our favorite stuff. Thule’s slogan is Bring Your Life and that’s what we do!

The platform we use to access the roof box doubles as a tiny roof top terrace where I go to enjoy the view, or escape from household chores. If you look closely at the picture below you can also spot our hanging table top that we attach to the slide door with strings and hooks when we need it.

Danne made a ladder and a bike rack too, that I’m going to tell you more about in another post. 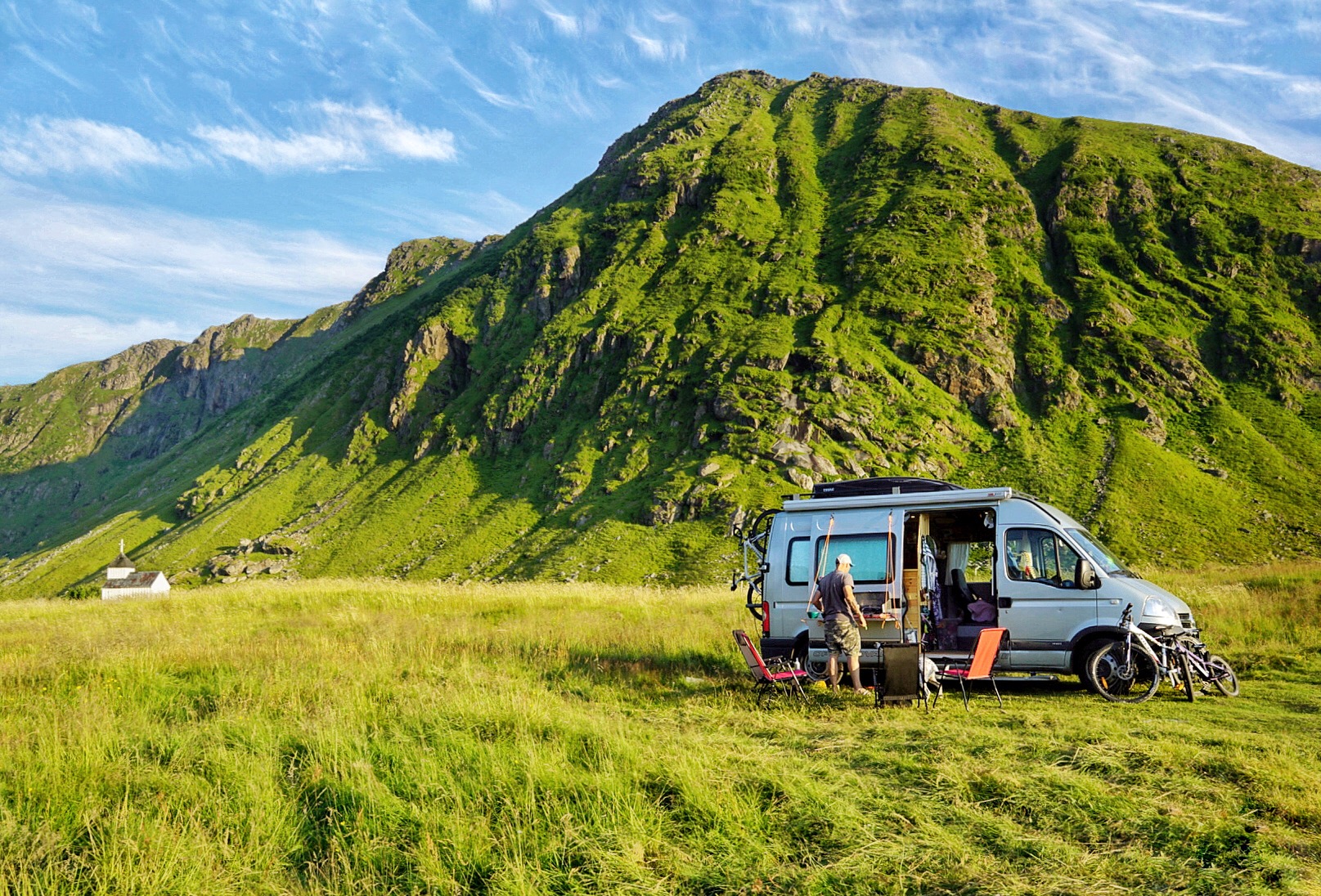 The Nordique is a lifestyle platform that showcases the beautiful, inspirational, and unique features of Nordic life. We had a little chat about our outdoor adventures and vanlife some months ago, you can read it here. 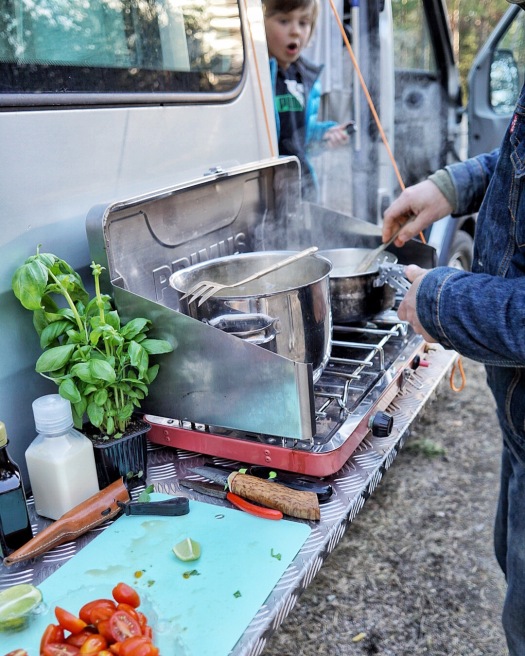 The Horizon Is Calling

The Horizon Is Calling